Discover What Makes Shock Waves So Successful in Medical Applications 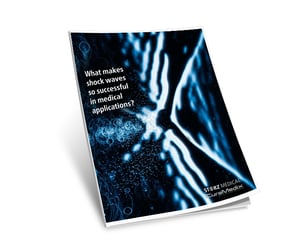 Satisfy your intellectual curiosity about the science behind shock wave treatment (also known as EPAT or ESWT) with this complimentary, highly informative white paper, What Makes Shock Waves So Successful in Medical Applications. In this resource, you’ll take a fascinating dive into the mechanics of this innovative and proven technology. You’ll read about the distinct characteristics of shock waves and what distinguishes them from other wave applications you are already familiar with, such as ultrasound.

Did you know the first successful use of shock waves in medicine dates as far back as 1980? The technology was initially used to non-invasively break apart kidney stones and other calculi. Researchers then theorized that perhaps the shock waves could also fragment calcified deposits in body tissue. While their initial theory did not pan out, the surprising outcome was improved blood circulation, which led to an intensified metabolism, induced healing and pain reduction.

The exciting field of shock wave treatment was born! And today, the number of known indications is continually growing, including such diverse specialties as orthopedics, cardiology, dermatology, pain therapy, traumatology and neurology.

But how do shock waves work? Why are they so effective? And why do other types of waves like ultrasound not produce a similar effect? If you’re a science person or even if you aren’t, you’ll enjoy this clear explanation into the science behind the medicine that answers these questions and more. You’ll explore the unique properties that contribute to shock wave treatment results, including:

Shock wave treatment has led to successful outcomes for a wide range of conditions, including muscular and vascular spasms, trigger point release, angina pectoris, pseudarthrosis, chronic soft-tissue pain, dermatological skin improvement and wound healing. You’ll also get a glimpse into the future of shock wave treatment and the promising indications for treating neurological pathologies such as Alzheimer’s.

With plenty of illustrations and straightforward scientific explanations, this paper is a quick yet in-depth read that’s beneficial to both experienced shock wave practitioners and those newer to the field.

Gain deeper insight into how this fascinating technology is advancing medical treatment across a variety of specialties. Download your copy of What Makes Shock Waves So Successful in Medical Applications today!

Subscribe to Our Newsletter
Timely tips and valuable insights for better clinical and economic outcomes for your practice
Connect With Us
Corporate Headquarters
40 Albion Road
Lincoln, RI 02865
877.699.8399
©2019 CuraMedix. All rights reserved  | Disclaimer